Radon and its influence on health – the case of United Kingdom and Scandinavia.

Radon is a radioactive gas with no taste, odor or color. It is created by the natural decay of the small amounts of radioactive uranium and radium. It is continuously released from soil, rocks and water containing these two elements. There is no possibility of detecting radon unless we have a special equipment and test for it. Radon breaks down into solid radioactive elements called radon progeny. They, in turn, can attach to dust and other particles and can be breathed into the lungs.

Radon can easily move through the ground into the air and enter our homes. We get most of our radon exposure when we are indoors whether at home or at work. It can seep through the pores in concrete and the gaps in walls and floors, as well as around drains and pipes. Any house can have elevated radon levels. It depends on the way the specific building interacts with the surrounding soil. Radon level is usually higher in basements, cellars and ground floors. Therefore, people who spend much of their time in such rooms have a greater risk for being exposed.

How does radon influence our health?

It has been proved that long-term exposure to radon can lead to lung cancer. When inhaled, radon particles (radon progeny) releases radiation that damages surrounding lung tissue, enters the bloodstream and eventually causes the cancer. Research shows that cigarette smokers are at even greater risk of developing lung cancer, when combining it with radon gas. Most radon-related lung cancers develop in smokers. However, according to World Health Organization, more than 10 percent of radon-related cancer deaths occur among non-smokers as well.

Some studies have shown that the exposure to radon can be also connected with other types of cancer, for example childhood leukemia. However, the evidence for this connection is not nearly as strong as for lung cancer. Because radon and its progeny are absorbed mainly by breathing and inhaling, it is very rare that radon would affect other tissues in the body.

Radon can be measured by using a simple detector. Although high level of radon can cause a health issues, the good news is it can be reduced by simple building works. Radon solutions include replacing or adding ventilation bricks in outside walls or installing a small pump in the loft that gently blows in air.

Radon in the United Kingdom

Research shows that radon causes about 1000 lung cancer deaths in the UK every year and it is now recognized to be the second largest cause of lung cancer in the UK after smoking. Over the past thirty years Public Health England (PHE) – an executive agency of the Department of Health and Social Care in the United Kingdom, have made radon measurements through the country in homes and workplaces. They have taken over half a million of those measurements, combined it with information about local geology to produce the radon map of the United Kingdom. The map shows where high radon levels are more likely in villages, towns and cities. 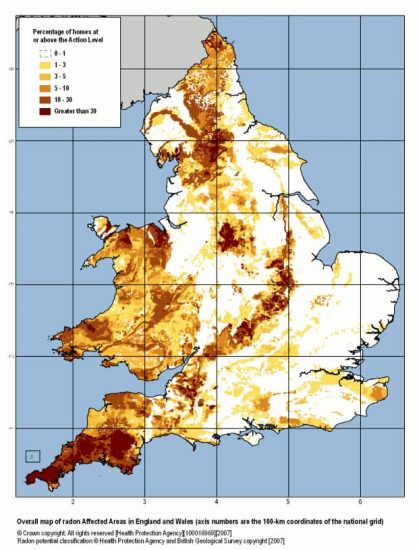 The darker areas of the map show where the problem is most intense. It can be seen that across England the counties the southwest have got quite a problem. There is a band of radon affected areas going up through the country, taking in places like the Costwolds, Northampthonshire, Lincolnshire, Derbyshire and right up through the Penn lines and parts of Scotland including Aberdeen, Orkneys and Shetland. Also much of Wales is affected by radon as are some parts of Nothern Ireland.

The Swedish Radiation Safety Authority estimates that radon gas in indoor air causes around 500 cases of lung cancer annually in Sweden. It is also an extensive problem in Norway and Finland, where it causes approximately 300 deaths from lung cancer each year. These three are among the countries with the highest average indoor radon concentrations in the world. The main reasons might be the high uranium concentrations in the bedrock and soil formations as well as a low air exchange rate due to cold climate.

The general recommendation has been made by the radiation protection authorities in Denmark, Finland, Iceland, Norway and Sweden. Together with the central government bodies, they created a national action plan for dealing with the long-term risks of radon exposure. The aim is to place a greater focus on the problem, find effective ways to identify buildings at risk, limit radon levels in newly constructed buildings and reduce it in existing buildings, and most importantly encourage people to measure radon in their homes.